Dominic, an Englishman, was in Paris studying French. Marjorie, a Frenchwoman, had just finished her art studies and was babysitting two Anglo-French children in the Loire Valley. One November, while Dominic was visiting his aunt, the babysitter came home with his cousins. That babysitter was Marjorie. They met again the following summer while Dominic was spending his holidays there and bonded over a mutual love of rock ‘n' roll.

Fast forward many happy years to November 13, 2015 when terrorists attacked at an Eagles of Death Metal concert in Paris where the couple had been. They both were fortunate and escaped, and three days later were engaged. Nothing like tragedy to bring people together. A year and a half later, they flew to San Francisco for an intimate city hall wedding with just the two of them. And us goggling at them! Let's live vicariously through them… 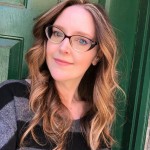 Comments on An intimate city hall wedding (with a fascinating romance backstory!)